COVID-19 Update: We are open and continue to operate. See our statement here.

Our crayfish eDNA service has been developed in house over a four-year period, working in collaboration with the University of Derby. Our white-clawed crayfish assay has been designed using the most sensitive sample collection technique and has been validated in a wide range of environments including ponds, streams, rivers and lakes to determine the most appropriate sample collection period for reliable species detection.

Our kit has been specially designed and optimised to obtain the maximum amount of DNA from a water sample possible. By using filters, we can collect DNA from volumes up to 1L (over 10x the amount collected using the ethanol filled tubes for GCN eDNA).

Only one kit is needed per site, regardless of how many species you wish to detect. Multiple species: white-clawed crayfish, signal crayfish, marbled crayfish and crayfish plague can be identified using our crayfish eDNA kit and analytical service.

When returning your kit, please indicate on the sample collection form which species you wish to analyse the sample for.

Turnaround times are up to 10 working days from receiving the sample at the laboratory. All prices ex. VAT. 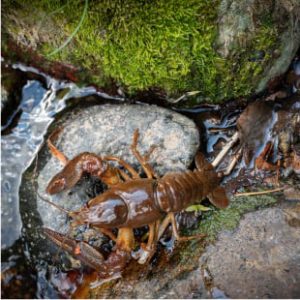 Returning Your Kit for Analysis

We recommend returning kits by courier with APC, they have depots across the UK and the most convenient drop-off spot may be found here. We also accept hand-delivered kits Mon-Thurs 8am-4.30pm and Fri 8am-4pm, and by appointment 24/7.

How many samples do I need to collect?

This depends on the size of the site and the question that you are trying to answer. For a small isolated site such as a pond, small lake or isolated river site one sample should be sufficient. For larger river systems and reservoirs, multiple samples should be taken from multiple sites to ensure the site is best represented by the sampling strategy. If you are struggling to determine how many samples to collect for a study site, then get in touch with us and we will be able to advise.

If you require a high level of scientific accuracy we recommend that you collect replicate samples from each site to ensure consistency and reliability in results.

Can you analyse for all four species from one sample?

Yes. Each sample can be analysed for all eDNA target species currently offered by SureScreen. Once the DNA has been extracted from a sample it can then be analysed multiple times: i.e. for white-clawed crayfish, signal crayfish, marbled crayfish and the crayfish plague.

Is the test specific to the species?

The assays used in the laboratory for the detection of the crayfish species and crayfish plague have by design been developed as species specific. This means that they will only detect and amplify DNA of the target species, thorough testing has been conducted to ensure that this is the case and that each of our assays for A. pallipes, P. leniusculus, P.virginalis, A. astaci and our other eDNA services do not cross-amplify any other species.

With the crayfish plague being a large problem for white-clawed crayfish in the UK at the moment, it is highly important that biosecurity measures are followed when collecting crayfish eDNA samples. We have designed a biosecurity friendly eDNA kit which includes single use components and therefore reduces the risk of transferring plague from site to site. However, it is also important that the end-user thoroughly cleans any additional equipment, wellies and clothes which they take to any site before moving onto a new site to reduce the risk of transferring any plague spores.

Anyone can sample! A license is only required if you are conducting a white-clawed crayfish survey additionally to the eDNA survey. If you are just simply taking a water sample and not intending to search for crayfish or disturb their habitat then you do not require a licence.

Are there any other laboratories that can analyse for the presence of White clawed crayfish?

At the time of writing (March 2020), no other eDNA laboratories offer species specific services for crayfish or crayfish plague.

Can this analysis prove the absence of crayfish for building development?

At the moment, this assay cannot be used on legal basis to support planning and building applications. However, it can be a useful survey tool for the primary detection of populations as a complimentary survey technique.

Is this method approved by Natural England or the Environment Agency?

This method is not currently approved by any approval body, however we are working towards this with the Environment Agency taking an assisting role with the validation of our method.

How accurate is the eDNA analysis for Crayfish?

The crayfish eDNA has a similar accuracy to that of the GCN eDNA service.

When is the best time to sample?

We recommend that samples should be collected between mid-April and late-October to coincide with when crayfish are most active (and hence releasing most eDNA). Samples can be taken outside of this window but may not provide highly reliable or repeatable results. Further to this the sample should be collected when the pond/river/stream is relatively calm, with little turbidity. Try to avoid sample collection from murky rivers/ponds or at sites just after large rainfall as the filter will soon clog and you will be unable to pass a sufficient volume of water through for analysis.

What volume of water do I need to filter?

The filters are designed to process up to 1 litre of fluid. However, in the case of rivers and streams, due to turbidity and sediment load it may not always be possible to filter such a high volume. We recommend the filtration of at least 150ml with an ideal filtered volume of 400ml, the higher the filtered volume the increased chance of obtaining eDNA within your sample (if it is present within the sample site). If you are unable to filter such high volumes – don’t worry. Just make a note of the volume which was filtered on the sample collection form.

Sample as per standard protocol.

Where possible try to avoid entering the water system and collect samples from either side of the bank. If it is necessary and safe to enter the water system, collect samples following a zig-zag pattern. Ensure that you sample in an upstream direction to avoid the collection of ancient sediment which may contain historical DNA from the target species. If you enter the watercourse, ensure that you implement full biosecurity protocols to avoid the spread of the crayfish plague.

For larger more difficult to access rivers it may be necessary to use multiple collection kits in order to ensure the reliability of species presence/absence. If you are unable to enter the watercourse as in the methods above then try where possible to collect samples from the edges, collecting a sub-sample every few metres in order to get a representative sample from the site.

If studying a large river system, it may be necessary to collect multiple samples at multiple points. For example, the collection of a sample every 500-1000m within a river. This is to ensure that you identify any populations which may be fragmented within the stream. Collecting multiple samples also enables the user to accurately indicate where a population may lie within the stream, as opposed to only collecting one sample and only knowing if the species is present or absent.

What are the chances of detecting old/no longer present populations of crayfish?

Results indicate that the DNA levels drop below detectable amounts no later than one month after all individuals have left the system. This means that there is minimal chance of detecting a population of crayfish which has been absent for several months.

Is eDNA for Crayfish more sensitive at detecting presence of Crayfish than traditional methods?

eDNA should not be used as a replacement for established/traditional survey methods. In its present form it is designed to be complimentary to these methods, as a primary survey technique which can enable the screening of large areas in a short amount of time with minimal training and licensing needs.